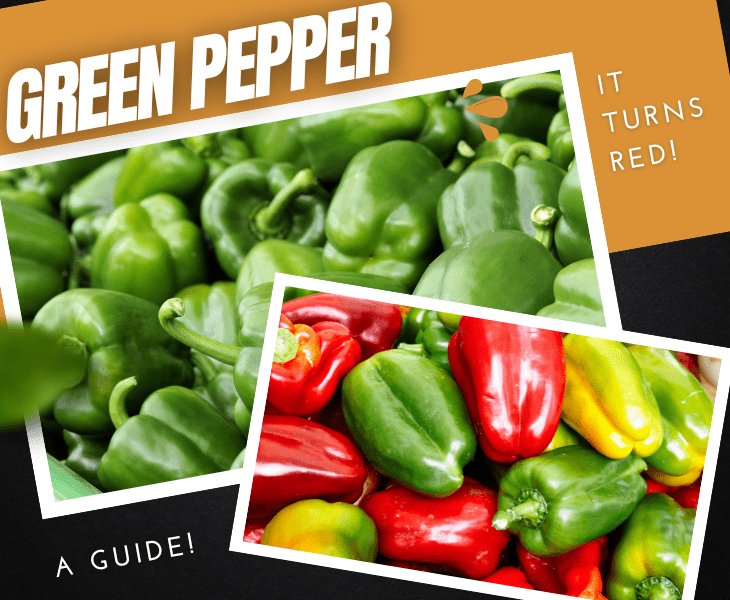 Can you eat a green pepper that turns red? It may not look like a serious question, but it becomes important when you do not know how to identify spoiled peppers.

All around the world, people are cultivating the pepper plant that originated in South and Central America.

And now hot peppers are a staple ingredient in the cuisines of both tropical Asia and the Americas.

When you have just started adding green peppers to your cooking, it is natural to feel concerned about peppers that look red.

So, can you eat green peppers when they turn red?

Yes, you can eat a green pepper that turns red because it is not spoiled and is only because it has fully ripened.

Can You Eat a Green Pepper That Turns Red?

Peppers can turn either green or red depending on how much time has passed.

This refers to the amount of time these fruits were allowed to hang on the vine before being harvested.

The change in color from green to red in bell peppers is not an indication of any sort of issue.

Rather, it indicates that the peppers have reached their maximum ripeness.

Is It Okay to Eat Green Peppers When Turned Red?

Although all green bell pepper cultivars were developed for harvesting when still young and green, it is absolutely acceptable to eat these peppers once they have turned red.

Just keep in mind that when turned red, green peppers may not have the same sharp, sour flavor.

The reason is that green bell peppers taste bitter due to a lack of sugar content.

The upside is that fully matured peppers have a stronger nutrient profile than their immature counterparts.

Ripened red peppers are loaded with antioxidants including vitamin E, vitamin C, and folic acid; in fact, they even have more vitamin E than an orange.

Can You Eat Pepper Part Red and Part Green?

Yes, it is okay to eat green pepper that is only partially red.

The thing is that every pepper begins as green, but as it matures, it changes its color, as dictated by its DNA.

Green peppers are less expensive than their orange, red, and yellow counterparts because they are picked earlier, requiring less work from the grower.

They do not turn completely red until after they have left the field, so they have less time to ripen and less sugar.

Does Green Pepper Continue to Ripen after Harvesting?

No, that is not going to happen.

Here’s the catch: after green pepper is picked, it will no longer ripen, unlike, say, avocados or bananas.

Your slightly green red pepper will never, under any circumstances, mature into a fully red pepper, regardless of how long you wait.

So, there is no point in letting them sit on the kitchen counter till they turn red.

And that is why your partially red pepper stays the same no matter how long you wait.

Can You Eat a Green Pepper that Turns Black?

Once the blackened portion of a red bell pepper has been removed, the pepper can be eaten.

Also, you should keep in mind that the pepper will still be edible on the inside, where the color is red.

Can You Use Green Peppers When Turned Red in Your Recipes?

Yes, you can use green peppers that turn red in cooking, but it is a good idea to consider their taste before you make the switch.

But, if your recipe calls for a slightly bitter taste, you will be much better off going with green pepper.

This is because the pepper’s fruit tends to increase in sweetness as the plant matures.

Red pepper, the mature form of the pepper, is typically sweeter than green pepper since it has had more time to develop its flavor.

This is one of the main reasons why green peppers are cheaper than red peppers in the supermarket.

It takes longer for red peppers to mature and require more care. However, unlike red peppers, green peppers can be harvested in a fraction of the time.

Which Color Pepper is Considered the Healthiest?

Although they are all healthy and pack a solid punch in terms of nutrients, you may still be able to find a higher vitamin C concentration in red peppers.

If you are looking for the most nutrient-dense pepper, choose a red one because it has been on the vine the longest.

Green peppers are picked before they develop their typical yellow, orange, and red colors.

Why Should You Include Ripe Peppers in Your Diet?

After trying a ripe pepper, you will understand why they are so highly regarded.

They have an indescribably delicious, sugary, soft, and juicy flavor.

Salsas and sauces made from ripe peppers are very delicious. Unripe peppers lack the usual pepper sweetness and are instead harsh and bitter.

Their flavor is more reminiscent of vinegar than anything else.

How Do You Store Pepper to Avoid Changing Colors?

As mentioned, there are certain dishes that require green peppers, so you may want to learn how to store them properly.

Peppers last longest if kept uncut and refrigerated in the crisper drawer of your kitchen’s refrigerator.

Ideally, pepper should be stored in a plastic bag immediately after chopping and used within a few days.

Can You Store Pepper for a Long Time?

Yes, it is possible but you have to follow the storage guidelines properly.

In most cases, chopped peppers can be frozen in an airtight container for use at a later date.

It is essential to chop peppers and place them on a cookie sheet to freeze them for a short time.

Then, you should move them to a freezer-safe bag for long-term storage.

You should use peppers as soon as possible since they form ice crystals quite quickly.

Softened after defrosting, peppers are best employed in culinary applications.

How Do You Know Green Peppers Turning Red are Spoiled?

You may have already gathered the fact that red peppers are not spoiled and are in fact healthier to eat.

But, you should also understand how to identify any signs of spoilage.

If they are deteriorating, you can typically tell just by looking at them or touching them. Choose firm peppers in the color of your choice.

As peppers age, their skin becomes softer and develops wrinkles. Raw consumption of these peppers is not recommended, although they can still be used in cooking.

Mold and slime will begin to grow on them as soon as they soften.

In this case, when you cut a bell pepper, the exposed side will get a white, wet color initially.

Remember, when mold appears, it is necessary to throw the pepper.

Though pretty rare, if you notice any off odor, take it as a sign that your pepper is probably spoiled.

Can you eat a green pepper that turns red? Thankfully, the color of your pepper does not have to do anything with its freshness. In most cases, a green pepper turning red indicates maturity.

And as it matures, it becomes sweeter, which is the reason why it is a preferred choice for many recipes.

But, keep in mind that both green and red peppers can go bad because of improper storage.

Know the signs and do not ignore them or else you might put yourself at risk of developing food-borne illnesses.