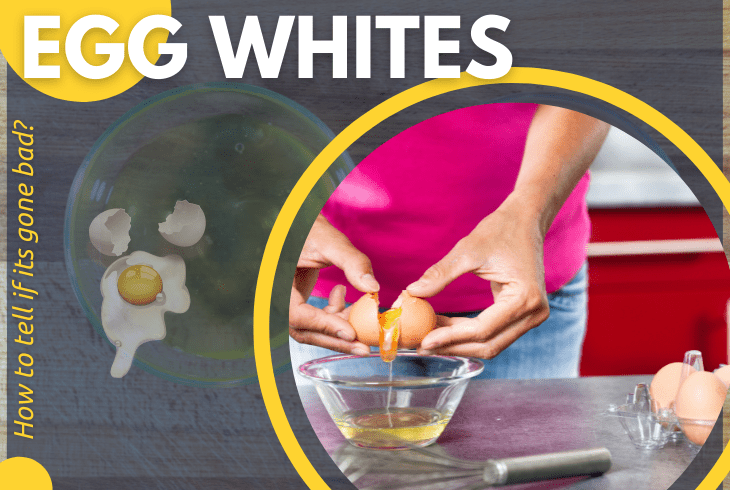 They are also a convenient way to cook eggs because you don’t have to worry about them sticking to the pan.

However, there is always the possibility that they can go bad.

This article will discuss how you can tell if liquid egg whites are bad and how to store and keep them fresh.

How Do You Know If Liquid Egg White is Bad? The Telltale Signs

You may produce your liquid egg whites by breaking open fresh eggs and dividing the whites into one bowl and the yolks into another.

How can you know whether your egg whites are still safe to eat, no matter where they originated?

The smell is likely the first thing you will notice. If your liquid egg whites are fresh, there shouldn’t be a discernible odor.

However, if your liquid egg whites are going bad or are already beyond their prime, the odor is unavoidable even if the carton hasn’t been opened earlier.

Egg whites should be clear and slightly yellow-tinged. Whether handmade or professionally prepared, other colors should not be present in your liquid eggs.

Any traces of crimson (from the hen’s blood) or other discoloration should be considered rotten and thrown away.

The consistency of commercially manufactured liquid egg whites should be uniform and loose, with no lumps or floating fragments.

However, it’s good to understand the liquid egg white appearance. Because there are variations of color that are safe and others that are not:

When the egg is deposited, high amounts of carbon dioxide produce cloudiness.

The cloudiness dissipates with time. These eggs are safe to consume.

If your egg white appears green or iridescent, it may contain hazardous germs not safe to eat.

If you notice that the color of your egg is odd, smell it. It’s usually a good idea to err on the side of caution and discard any eggs that may be contaminated.

⚡ You May Also Like:  Why Do My Eggs Stick to My Non Stick Pan?

White threads in the egg white – sometimes known as chalazae.

It maintains the egg yolk on the egg white in place. White threads are a more visible indicator that you have a very fresh egg.

It is not necessary to remove the white strings before cooking.

Liquid egg whites have no particular flavor while fresh, but if they’ve gone bad, each swallow will have a whiff of rottenness.

It is dangerous to consume any egg product that tastes even slightly sulfuric since this might result in severe food poisoning.

The processing and preservation technique is the primary distinction between homemade and commercialized liquid egg whites.

This method assures that the egg whites are safe to consume by eliminating any contaminants via sterilization and increasing shelf life.

However, it does leave them considerably thinner and runnier.

In their natural condition, fresh egg whites include two distinct components: albumen (or egg white) and chalazae (stringy pieces that hang the yolk in the albumen).

⚡ You May Also Like:  Does Garlic Salt Go Bad? A Complete Guide

The older the egg white, the thicker the albumen; conversely, it is considerably older if an egg white is very runny.

However, although manufactured the consistency of fresh egg whites is similar to that of old egg whites from an egg, distinguishing between the two may be difficult since they do not represent the same thing.

It’s unlikely that you’ll notice any signs of mold on your liquid egg whites unless you first notice a truly foul odor.

Any trace of mold and your egg whites should be discarded.

Knowing how to care for your liquid egg white will help you keep them from spoiling.

If you want your liquid egg white to last longer, keep the following guidelines in mind:

⚡ You May Also Like:  Can You Recycle Egg Cartons? A Definitive Guide

Then, crack eggs into a bowl and gently pour the egg whites into the mold, careful not to get any yolk in there.

Pop the tray into the freezer and let it solidify overnight. Once frozen, transfer the white egg cubes to freezer-safe bags. Place these safe bags in the deepest part of your freezer.

Liquid egg whites hold quite well in the fridge if kept cool. Temperature variations may harm the egg whites and accelerate their aging.

Unopened liquid egg whites should survive for around ten days if kept in ideal circumstances, at or below 4 C/39 F, and away from warmer drafts when the door is opened.

However, once opened, this period is reduced to three days. Fresh egg whites only stay in the fridge for 3-4 days, so it’s best to break them as required.

Keep your liquid egg whites in the coldest section of your fridge and their original, unopened package until required.

This will assist reduce exposure and avoiding early spoiling.

Compared to the full egg, egg whites are rich in protein but poor in nutritional content.

Allergic reactions, infections, and deficits are also related to bad egg whites. However, not everyone will suffer from these side effects, so it is best to be prepared.

Salmonella may be found in both excellent and poor egg whites. Heat, on the other hand, kills salmonella in egg white.

As egg whites deteriorate, they acquire additional forms of bacteria, such as E. Coli, which may cause severe disease.

If an egg is contaminated, sickness symptoms emerge between six to 48 hours and may include:

Some individuals are allergic to both egg whites and albumin proteins.

Eating bad egg whites may cause serious symptoms such as decreased blood pressure, loss of consciousness in rare circumstances, trouble breathing and irritation in the throat or mouth,

Symptoms usually appear within six and 36 hours after eating a tainted egg and may persist between four and seven days.

Most of the time, the symptoms go away on their own.

How Long Do Liquid Eggs Last Once They’ve Been Opened?

Liquid egg products that do not have an expiry date may be kept at 40 °F or below for seven days. Use within three days after opening.

Opened cartons should not be frozen, nor should frozen cartons that have been thawed be refrozen.

Is It Safe to Eat Liquid Egg Whites Refrigerated for More than Two Days?

No, it is not safe to eat liquid egg whites that have been refrigerated for more than two days.

The egg white will start to form a thick film on the egg’s surface and will develop an off-odor.

Can I Still Use Liquid Egg Whites Frozen for More than Two Months?

Yes, you can still use frozen egg whites that have been stored for more than two months.

However, the quality of the egg white will decline, and it will be less effective in recipes.

So, how to tell if liquid egg white is bad? If it has a foul odor, is discolored, or has chunks, then it is probably time to discard it.

Also, if it has been more than two weeks since the sell-by date, you should get rid of it.

When in doubt, it is always better to err on the side of caution and throw it out.