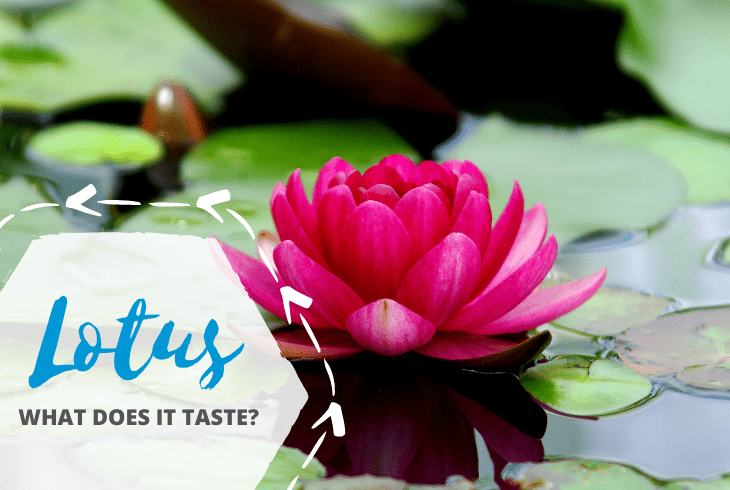 What does Lotus taste like? This is a question that many people have asked, but it is hard to find an answer.

That’s because there are so many different varieties of Lotus, and each one tastes a little bit different.

In this blog post, we will explore the different flavors of Lotus and give you our answer as to what it tastes like.

The lotus plant is a flowering plant that has been around for centuries. It’s a large aquatic plant with big, beautiful flowers that bloom above the water’s surface.

It’s a sacred flower in many Asian cultures and is used in traditional medicine.

It’s often used in soups and stir-fries. Lotus seeds are also eaten as snacks or used in desserts.

The lotus plant can also be cultivated in ponds or marshy areas for its beautiful flowers and its edible roots and seeds.

The taste varies depending on the type of lotus plant.

The parts of Lotus, such as the leaves, flowers, roots, and seeds.

Whether it’s eaten raw or cooked and the recipe used to cook Lotus.

Let’s start with the following;

Parts of Lotus and Their Taste

Lotus leaves taste slightly bitter but mostly sweet when raw, and when cooked, they take on a spinach-like flavor.

Many people enjoy eating them fresh in salads or steamed as a side dish. Lotus leaves taste great when cooked with other vegetables or even on their own.

They also contain flavonoids, which are powerful antioxidants. Lotus leaves are low in calories and fat, making them a healthy addition to your diet.

Lotus root can be eaten raw or cooked, but it is most commonly boiled, mashed, or stir-fried. It can also be added to soups or stews. What does Lotus root taste like?

Lotus root has a crunchy texture with a slightly sweet taste when eaten raw and has a delicate sweet flavor and firm texture when cooked.

The taste is similar to a cross between a potato and water chestnut, with a slightly nutty aftertaste.

It is often used in Asian cuisine, either as a vegetable or in soups and stews. Lotus roots can also be pickled or candied.

Lotus root is a good source of fiber, vitamin C, potassium, and other minerals. It’s also low in calories and fat.

What does lotus seed taste like? Lotus seeds have a nutty flavor that is similar to sunflower seeds.

They are often used in Asian cuisine and can be eaten raw, roasted, or ground into flour.

When cooked, they have a chewy texture and can be used in soups, stews, and curries. Lotus seeds can also be ground into a paste and spread or filled in cakes and pastries.

Lotus petals are crunchy and have a mild sweet taste. The flavor is similar to that of a cucumber or honeydew melon.

Some people also describe the taste as being slightly floral. Lotus flowers can be eaten raw or cooked. They are often used in salads, stir-fries, and soups.

Different Types of Lotus with Their Taste

Lotus is a type of aquatic plant that has many different varieties, but what does Lotus taste like?

Each variety has a slightly different taste, but they all share some common flavors.

Let’s discuss some of them.

It tastes a bit like a cross between cucumber and watermelon. The texture is slightly crunchy with a mild, slightly sweet flavor.

The texture becomes a bit more firm when cooked, and the flavor is slightly stronger.

They are often used in salads, adding a unique crunch and sweetness to dishes.

Some people also enjoy eating their seeds, which have a nutty taste. Overall, angel wings make a delicious, refreshing addition to any meal.

The sacred Lotus has a taste often described as nutty, earthy, and slightly sweet, like a mix of water chestnut, cucumber, and green bean.

The texture is also crunchy and firm, making it a great addition to salads and other dishes.

Some people also enjoy eating the seeds of the sacred Lotus, which have a mild flavor and are packed with nutrients.

The taste of the Pink Lotus is often described as sweet and floral. The texture is crunchy and firm, making it a great addition to salads and other dishes.

Some people also enjoy eating the seeds of the Pink Lotus, which have a mild flavor and are packed with nutrients.

It’s the most bitter of all the varieties of Lotus. It has a pungent, earthy taste and is often used in savory dishes.

It has a sweet, nutty flavor and is often used in desserts.

It also has a crunchy and firm texture, making it an excellent addition to salads and other dishes. Its seeds have a mild flavor and are high in nutrients.

The celestial Lotus has a taste often described as sweet and floral. The texture is also crunchy and firm, making it a great addition to salads and other dishes.

It’s a variety of Lotus black in color. It has a sweet, earthy flavor and is often used in savory dishes.

The texture is crisp and robust, making it an excellent accompaniment to salads and other foods.

It’s a type of Lotus green in color. It has a sweet, grassy flavor and is often used in salads. It also has a crisp and firm texture.

It has a sour, citrusy flavor and is often used in savory dishes. The texture is firm and crunchy, making it a great addition to salads and other dishes.

Lady Lotus is pink in color. It has a sweet, floral flavor and is often used in desserts and the texture is crunchy and firm,

It’s a type of Lotus red in color. It has a sweet, fruity flavor and is often used in desserts.

Lotus is not only a beautiful flower, but it is also a delicious and nutritious plant. The lotus plant has many health benefits, including:

Is Lotus a Root Vegetable?

Lotus is not a root vegetable but rather a flowering plant that grows in ponds and marshy areas.

The plant roots are used in traditional Chinese medicine, while the flowers and seeds are edible.

Can you Eat Lotus Root Raw?

Yes, you can eat raw lotus root, but it is often more tender and flavorful when cooked. Lotus seeds can also be eaten raw, but they are a little bit harder to chew

How do you Prepare Lotus?

Lotus can be cooked in various ways, such as boiling, steaming, or frying. It is also popular in soups and stir-fries. Lotus seeds can be eaten raw or roasted.

⚡ You May Also Like:  Why Does Microwaved Meat Taste Bad? - (Tips to Preserve Taste!)

What does Lotus taste like? Lotus is a delicious, nutritious plant that can be enjoyed differently.

Its flavor is slightly sweet and nutty, making it the perfect addition to any dish.

Lotus is also high in fiber and protein, making it an ideal choice for those looking for a healthy snack or meal.

The consensus seems to be that Lotus tastes like a cross between a cucumber and a zucchini. It’s refreshing, slightly sweet, and has a distinct flavor apart from other vegetables.