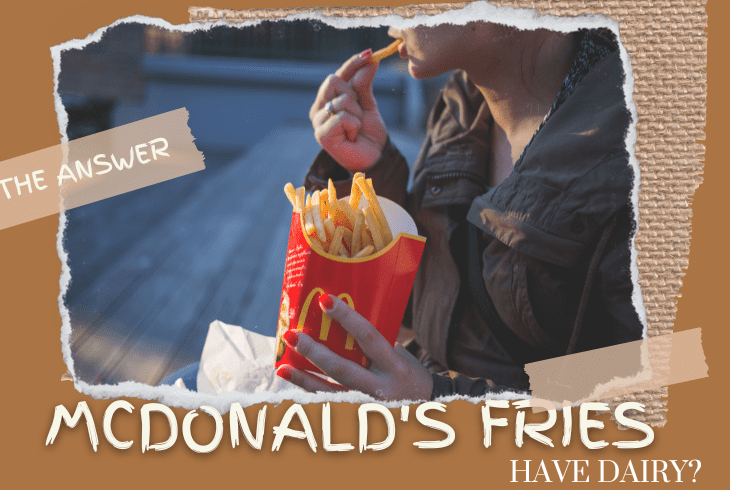 If you ask this, you are probably worried about the food that could throw you out of your vegan lifestyle.

It is difficult to find a person who dislikes the American classic, irrespective of their opinion on the fast-food establishment.

But, anything that contains dairy is off-limits for those who strictly follow a vegan diet.

So, do McDonald’s fries have dairy in them? You may believe McDonald’s French Fries are composed of potatoes, vegetable oil, and salt.

But, that’s not the case, unfortunately!

Yes, McDonald’s fries contain dairy, though it varies a little from country to country, but they usually have beef flavoring, making them unsuitable for vegans.

Do McDonald’s Fries Have Dairy?

How often have you gone on a long journey where the only sign pointing to a fast-food restaurant was for McDonald’s?

Your friend exits the freeway feeling pleased with the prospect of a so-called “Happy Meal,” whilst you sense only anguish.

Well, just because you are vegan and know that McDonald’s is not a great place for vegans to hang out.

But, wait, what about those French fries? They are just oil, salt, and potatoes, aren’t they?

Unfortunately, McDonald’s French fries are not safe for vegans, or vegetarians because they use beef flavoring and dairy.

How Does McDonald’s Make French Fries?

To understand exactly why those French fries are not safe for vegans, you need to consider their cooking process.

McDonald’s uses non-GMO potatoes, which is a good start.

Once the potatoes have been delivered to the facility, they are peeled and fed at a rate of 65 miles per hour into a cutter in order to produce perfectly uniform French fries.

Then, the extra natural sugars are washed away for aesthetic purposes by quickly submerging them in hot water.

McDonald’s claims that blanching prevents rot by neutralizing enzyme activity and creates a light and airy inner feel mimicking that of a baked potato.

Step #2: Exposed to Other Ingredients

Now that the fries have been chopped and blanched, they are dipped in an “ingredient bath” made of sodium acid pyrophosphate and dextrose.

According to McDonald’s, the “bath” is essential for achieving a uniform golden color and stopping the potatoes from becoming gray after cooking.

The next step involves drying and frying to ensure a crisp exterior, which is also the phase when seemingly harmless fries turn into a monster for vegans.

McDonald’s claims that they fry their potatoes in a blend of oils including soybean, canola, and hydrogenated soybean oil.

It does not stop here – they add natural beef flavor to the mix, usually derived from beef fat, which also contains milk and wheat derivatives.

They also expose those fries to dimethylpolysiloxane and citric acid, to reduce oil foaming and preservation.

But, in the process, those fries lose their “vegan-friendly” status.

The last step involves flash-freezing those fries and shipped to different restaurants for cooking.

Do McDonald’s Fries in all Parts of the World have Dairy?

It is a tricky question to answer.

Where you get McDonald’s fries often determines whether or not they are vegan.

They are vegan in several nations, including the United Kingdom.

However, vegans and vegetarians are unable to consume the fries available at US locations of the fast-food company.

Read on to learn why.

Do McDonald’s Fries Have Dairy in the UK?

The Vegetarian Society has approved McDonald’s French Fries in the UK, so you know they are cruelty-free.

Potatoes and an oil mixture of rapeseed and sunflower are used to make the chips, as they call them in the UK.

They are fried in special vats that are kept separate from those used for cooking meat.

Do McDonald’s Fries Have Dairy in the US?

In the United States, McDonald’s fries use beef flavoring, which is derived from milk and so not safe for vegans.

When McDonald’s first opened, they cooked their fries in lard (animal fat).

Because of consumer backlash, they switched to beef flavoring.

French fry suppliers for McDonald’s employ a touch of beef taste as a natural seasoning during the par-frying process to boost the fries’ savory appeal.

What is With the Oil?

The French fries at the eatery are fried in an oil mixture that includes canola.

Those fries are not even safe for vegetarians because none of their products are certified vegetarian.

You may find some vegan wraps, burgers, and dippers in other countries, but McDonald’s US has no such options.

In the US, companies do not need to declare the chemicals in flavor additives if the FDA recognizes them as safe.

Because of the prevalence of milk and wheat allergies, their presence must be noted, but meat does not fall into this category.

McDonald’s does not have to warn customers about meat, which is why they do not specify if the fries are suitable for vegetarians.

Do McDonald’s Fries Have Dairy in Canada?

McDonald’s fries may be an option for Canadian vegans because they are made without animal products.

However, the McDonald’s Canada website does not certify any items as vegetarian and confirms that food products may contain trace amounts of ingredients from animal sources.

Although McDonald’s fries come from different facilities in Canada, you cannot always rule out the risk of cross-contamination with these.

What Cooking Oil Does McDonald’s Use When Frying?

Again, it varies greatly for restaurants from country to country.

In the UK, they utilize a blend of rapeseed oil and sunflower oil. But, in the US, they also go with canola oil, hydrogenated soybean oil, and corn oil.

McDonald’s Canada has confirmed the use of both hydrogenated soybean and canola oils, whereas McDonald’s Australia sticks with canola oil.

Are McDonald’s Fries Safe for Vegans?

In recent years, McDonald’s menu has changed due to typical product substitutions and dairy supplier contracts.

They now use genuine butter, offer various buttermilk-based products, and are a little more generous with dairy goods.

Some of their iconic items are still dairy-free based on their ingredients, but the possibility of cross-contamination with dairy has increased.

Additionally, they have discontinued all salads – even the fries are not vegan-friendly because of animal flavoring and dairy.

So, why on earth would a vegan want to go to McDonald’s?

What Can Vegans Order at McDonald’s?

Unfortunately, McDonald’s offers a very limited selection of vegan-friendly options at this time, and most of the stuff contains dairy or animal ingredients in some form.

What is NOT Vegan at McDonald’s?

In the US, McDonald’s is not a great choice for vegans. Even those seemingly harmless French fries are not vegan, and you probably already know that.

Similarly, many other products contain milk or beef fat, such as Hash Browns, Shakes, Donut Sticks, Chocolate Chip Cookie, Fruit Smoothies, and so on.

What is Vegan at McDonald’s?

If you want something for breakfast, you can go with the Fruit and Maple Oatmeal but tell them to avoid any cream and get you some apple slices instead.

For lunch or dinner, you can go with the same. But, you can also mix and match with the following:

You can go with flour tortilla, English muffin, or artisan roll to get 100% vegan bread whenever you like.

Some safe veggies at McDonald’s include tomatoes, lettuce, and pickles.

Go with Some Vegan Dressings

There are a few options available in this regard like you can go with classic oil and vinegar.

Some obvious options include apple juice, orange juice, and soda.

But, you can also order hot coffee, iced coffee, or iced tea, but without cream or milk.

So, Do McDonald’s fries have dairy? Of course, they do!

When you are a vegan, it is natural to think French fries are good to eat.

But, think again! Especially when you think of McDonald’s. At least that is the case when you are in the US.

But, in any other part of the world, you may still want to confirm with them or look for other, safer, vegan-friendly foods.