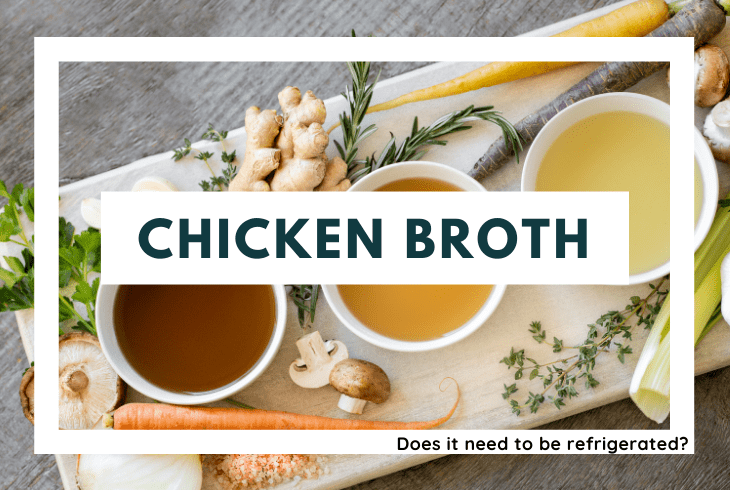 Staring at that opened can, you wonder: Does chicken broth need to be refrigerated?

Imagine you’ve gone to your local grocer and bought three cans of chicken broth for the chicken soup you’re making from scratch.

You follow the recipe to the tee, and as you’re cleaning up, you realize there’s still a bit of chicken broth left because the recipe only called for two and a half cans of broth.

You don’t want the extra broth to go to waste, but should you refrigerate it or let it sit out?

You bought it in the unrefrigerated section after all, so it shouldn’t be put in the fridge, right?

Why Does Chicken Broth Need to Be Refrigerated After Opening?

The chicken broth must be put in the fridge once opened even though you buy it from the unrefrigerated section of the store.

⚡ You May Also Like:  How Long is Vacuum Sealed Chicken Good For? Complete Analysis!

It doesn’t matter if it came in a can, carton, or another container.

The longer you leave it out, the more prone it is too harmful bacteria.

The reason it can be sold in a can on a shelf is that the broth is brewed in a sterile environment and then sealed in an airtight container.

That prevents the chicken broth from spoiling and allows it to have a long shelf life.

Unfortunately, once the chicken broth is exposed to open air, you have to refrigerate it no matter how clean you keep your kitchen and how little air you let into the container.

Think about it this way: chicken broth comes directly from boiling raw meat bits and bones.

You wouldn’t leave out raw chicken overnight, would you?

You also wouldn’t leave the cooked chicken out either. It becomes dry, covered in germs, and dangerous to consume. The same can be said about broth, which is made from meat.

Why Does Putting Chicken Broth in the Fridge Help?

The bacteria and molds that grow on food are living organisms, just like humans.

⚡ You May Also Like:  How to Reheat Chicken Tenders in Air Fryer

They may not be as sentient as people, but they aren’t resistant to the cold either. That’s why keeping food at low temperatures slows and prevents unwarranted growth.

Of course, the cold only slows food spoilage and doesn’t completely prevent it.

Bacteria may be inhibited by the cold but are quite resilient and will get to last night’s leftovers eventually.

Keeping the broth in its original, unsealed container is best at keeping these germs out, and once it’s broken, you can only extend its life by a few days.

In short, bacteria and mold don’t like the cold, but they’ll brave it to enjoy a nice, chilled helping of your chicken broth.

How Long Can Chicken Broth Last in the Fridge Once Open?

Once chicken broth lasts a similar amount of time as the store-bought raw chicken, which is about three to four days.

⚡ You May Also Like:  Can You Cook a Whole Chicken From Frozen? Facts to Know!

After four days, the broth becomes unsafe for consumption and should be discarded.

You may have kept soup in your fridge for longer, eaten it, and been completely fine.

It’s true that food is typically okay to eat a little while after the date it is said to expire, but this date is the last date you can eat the food safely.

Circumstances can vary, and people have continued to live healthily after consuming 7-day old chicken broth.

Some people could go their entire lives without getting food poisoning from a bit of expired broth.

It’s better to be safe than sorry, though, so always keep your leftovers chilled and reheat them thoroughly before eating.

When you ask “is leftover chicken broth safe to eat at room temperature?” you may be referring to fresh chicken broth.

This is because processed chicken broth usually has preservatives that make it last longer and prevent bacteria.

Remember this the next time you decide to make a big batch of broth; the leftovers may not last as long as you need unless you stick some in the freezer.

Bouillon cubes or powdered broth mixes will last longer than liquid versions, but they’ll still have expiration dates on the package you need to follow.

Can I Freeze Chicken Broth Once It’s Opened?

You can freeze an open can or carton of chicken or beef broth to extend its shelf life if you know you won’t use it for a while.

The same can is true about soups you make with these broths. It’s a great way to store chicken broth for up to six months.

If you do want to store your frozen chicken broth, move the broth to a sealed container with as little air as possible.

⚡ You May Also Like:  Does Meat Need To Be Submerged In Slow Cooker?

Keep the broth at below-freezing temperatures while not going too low to avoid freezer burn.

Thaw in the fridge when ready for use to prevent bacteria growth.

The Container Seal Came Broken. Should I Put it Right in the Fridge?

Throw out any container that has a broken seal immediately.

When the seal breaks, those harmful bacteria we were talking about before can get in and spoil the broth.

There’s no telling when the seal broke, so you should always throw it out as soon as you notice this.

Here are some answers to commonly asked questions from around the web.

How Long Do Other Broths Last?

Other broths and stocks such as beef broth, spicy seafood broth, and vegetable broth have a similar fridge life of about three to four days.

Vegetable broth tends to last slightly longer than meat-based brothers, but only by about a day or two.

How Do I Tell If Chicken Broth Has Gone Bad?

The chicken broth that is long past its expiration date will become cloudy and discolored. It’ll take on a lighter and cloudier form.

When determining if food is okay or not, one of the best indicators is your nose. If a piece of food smells funky, odd, or rotten, then that’s a sign it’s time to throw it out (unless it’s smelly cheese).

Can You Boil Bad Chicken Broth?

If your chicken broth has gone bad, not even boiling it can save it. It’s still not safe to eat, and the flavor will be ruined anyway.

Hopefully, this guide has provided you with helpful information on the question: does chicken broth need to be refrigerated?

In summary, the chicken broth should be stored in the fridge after opening and will only last three to four days afterward.

It may be okay to eat a little while after, but it is technically unsafe after this time. Don’t take the risk if you don’t have to.