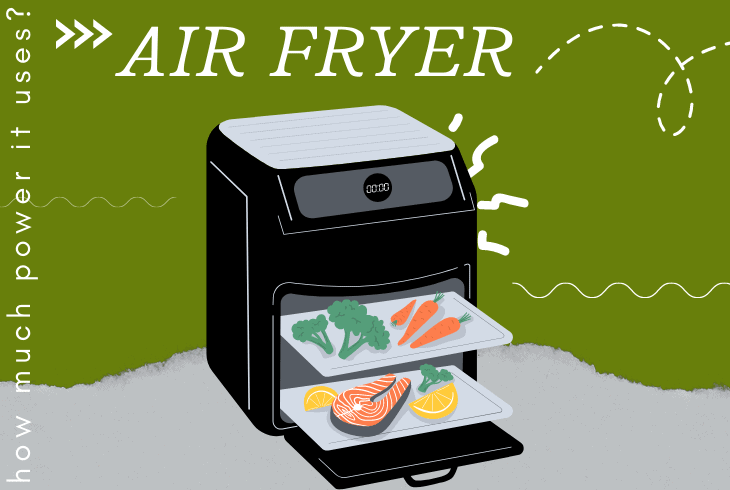 Air fryers are one of the hottest new kitchen gadgets, but you should consider answering, “How much power do air fryers use?” before getting one.

Is the energy cost worth it?

It’s crucial to understand the amount of energy that any appliance in your house uses.

If you are trying to reduce your energy usage, you probably also want to compare an air fryer to other cooking options.

Does an air fryer use more electricity than an oven?

How much power do air fryers use? It depends on various factors, but some mid-range air fryers use around 1.5 kWh for every hour used, usually much less than a conventional oven or a traditional deep fryer.

The Wattage of an Air Fryer Model

We’re going to cover a lot of factors that help understand how much power air fryers use.

The most vital factor is the specific model of air fryer you choose to purchase.

⚡ You May Also Like:  Ninja Air Fryer Won't Turn On? - Complete Fix Guide!

Most kitchen appliances, air fryers included, have a wattage rating to help understand how much power they use. Air fryers come in many sizes.

So, if you’re trying to figure out what air fryer to get and are concerned about the power it uses, try to get a smaller model.

Make sure to get one that can cook the amount of food you need.

If you’re cooking for a large family, then a smaller model might not fit all of the food.

Now that you have an idea of the power ratings of air fryers, let’s try to put that into a bit of context. It doesn’t mean much when you see 1,000 watts alone.

There is a pretty simple way to convert the power usage into the same thing used to measure your energy bill.

⚡ You May Also Like:  What Happens When you Put Ice in Hot Oil? Positive and Negative Impacts!

Take the watts, and multiply them by the hours used. Finally, divide that number by 1,000. The result is the kWh.

As we just discovered, the amount of time you use the air fryer makes a big difference in how much power it uses.

So, how can you figure that out?

Like most cooking, the amount of time that food has to spend in the air fryer depends on:

⚡ You May Also Like:  Can You Season a Pan with Olive Oil? Ultimate Guide

Some foods cook a lot quicker than others. If you’re cooking up thick pieces of meat like chicken or pork loin, that will take a significant amount of time.

On the other hand, if you’re making some crispy kale chips or other thin-cut vegetables, those will cook much quicker in an air fryer.

The more time the food takes to cook, the more power the air fryer will use.

The amount of food that you put into the air fryer also changes the amount of power it uses. It is quite similar to a conventional oven in this way.

If you only put one chicken breast inside the air fryer, it will cook much quicker than if you fill the entire appliance.

As the air fryer generates heat, there is more substance (chicken) to absorb this heat.

The settings are also a crucial part of energy usage. If you go with the highest setting, an air fryer will use the most power.

⚡ You May Also Like:  What Is the Best Oil For Deep Frying French Fries?

If you use a lower power setting, it will use less energy.

But this is a tricky thing to balance. Even though the higher setting will use more power, it might not have to run for as long of a time.

But generally speaking, consider how much time it takes to bake, grill, or fry the food you want to put in the air fryer.

How Much Power Do Air Fryers Use?

Now, let’s apply what we know to the questions rolling around in our heads. And what is the cost of using an air fryer?

We now know that air fryers have a wattage rating, ranging from 800 watts to 2,200 watts.

We can get the estimated kWh by taking that rating, multiplying it by the hours used, then dividing by 1,000.

But what does kWh mean? How much is that going to take out of your bank account?

Cost of Using an Air Fryer

The price of electricity is usually provided on a per kWh basis and can typically range from $0.10 to upwards of $0.30 per kWh.

⚡ You May Also Like:  Can You Boil Water in an Air Fryer? Complete Guide!

$0.15 per kWh is a reasonable middle-ground estimate.

Let’s look at another example using this. This time, let’s say that we have a hungry family and want to cook up 4 chicken breasts 3 times per week.

Since we want to cook a large portion often, we probably want to get a big air fryer, perhaps one that uses 2,000 watts.

The instructions say that amount of chicken usually cooks in 20 minutes.

Unlike some appliances, like refrigerators or air conditioners, air fryers cook for a small portion of time. The amount of power used is somewhat limited, even if you use them often.

⚡ You May Also Like:  Why Is My Air Fryer Not Working & How To Fix

But what about comparing them to other kitchen appliances and other cooking methods?

Does an Air Fryer Use More Electricity Than an Oven?

An oven’s power rating is typically between 1,000 and 6,000 watts. But they do not use their full energy the entire time they are on.

They use it to heat up, then will only turn it back on when the temperature dips and more heat is needed. The same is true with an air fryer.

But since an air fryer uses fans to circulate the warm air around the food, it might use its full power more often than a conventional oven.

So, which one uses more energy, an oven or an air fryer?

If you only have access to a powerful oven that uses 5,000 watts and you want to cook a small bit of food, then a small air fryer that uses 1,000 watts will use significantly less energy.

⚡ You May Also Like:  What Causes Oil To Foam When Frying? Complete Analysis!

But if your air fryer is around the same size as your oven at 2,000 watts, then perhaps it does not matter which of the two you use.

Energy Use of an Air Fryer Wrapup

How much power do air fryers use? You can figure out the exact amount of kWh if you have the wattage and the cooking time.

Find the rating in watts and multiply it by the hours of use. Then divide by 1,000. That is the kWh of use any air fryer will have.

Determining exactly how much power the air fryer use depends on the type of food you want to cook, the amount of food, and the settings you use.

An air fryer is a pretty energy-efficient way to cook food.