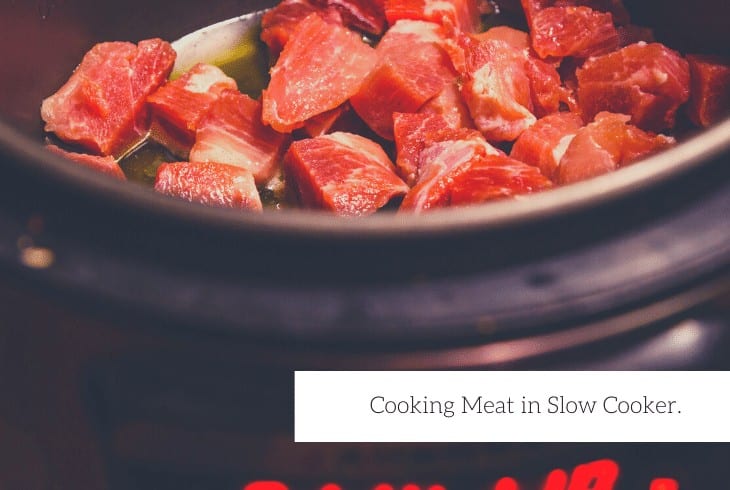 Cooking meat in a slow cooker is game-changing but do you ever wonder – does meat need to be submerged in slow cooker?

Let’s dive into this question as well as how much liquid you need to add for your recipe to be worthy of a chef’s kiss.

Slow cookers are one of the best appliances to invest in when kitting out a kitchen, especially if you don’t have a tonne of time to dedicate to watching the pan.

If you’re a busy, working parent trying to run a business or someone who just hates standing in the kitchen for more than 10 minutes, a slow cooker is the answer.

Not only do they save you time when cooking a family dinner or meal prepping, but they can also produce the most delicious soups, stews, and succulent meats that just fall off the bone.

Do You Always Need Liquid In Slow Cooker Recipes?

Typically, recipes will call for the liquid to be added, especially in the case of soups and stews. But you don’t always need to add liquid to your slow cooker recipe.

For example, the ingredients such as mushrooms, high water content vegetables, or even the meat and poultry itself will release water when cooking, allowing the meat to cook in the liquid from the other foods.

⚡ You May Also Like:  Does Chicken Broth Need to Be Refrigerated?

How Much Liquid To Add To A Slow Cooker?

When it comes to how much liquid to add to a slow cooker, the amount will largely depend on the recipe you are using.

The key is to find a balance between not overfilling or underfilling your pot. Just as much as you don’t want a leaking pot, you also don’t want your food to burn.

As a rule of thumb, you want to aim to fill the liquid at least halfway, but leave at least a quarter, or a third of the slow cooker empty at the top to allow for cooking space.

Ensure you do not overfill the slow cooker with water as this can lead to extra-long cooking times.

As well as general liquid quantities, the volume of alcohol-based liquids will change the cooking time needed. The alcohol can’t cook-off as it would do on a stovetop recipe in a slow cooker.

Therefore, you need to go sparingly on the wine or beer when making recipes with the lid on in your slow cooker.

Does Meat Need To Be Submerged In Slow Cooker?

As well as the rule to fill the slow cooker at least half full, you may wish to submerge your meat and ensure it is covered in liquid. This is the method you would use to stew the meat.

The meat will cook the most evenly when it is uniformly and completely submerged.

You can even use a wooden spoon to push the meat into the water or broth.

However, submerging isn’t essential with all meats and cuts. The meat will still cook whether it is fully submerged or not. A half-filled slow cooker will cook your meat by braising it rather than stewing it.

⚡ You May Also Like:  Can You Defrost Chicken in Hot Water? The Ultimate Guide

It just depends on your preference and recipe.

If you want the recipe to be thick and less juicy, you may get away with flipping the meat over halfway through cooking.

This can help ensure even cooking. However, you never want to open the lid mid-cooking unless you need to.

Flipping the meat won’t necessarily ruin the overall cooking process, but do it once and quickly to avoid the temperature dropping significantly.

Pay attention to the order you add ingredients to the slow cooker. As a general rule, root vegetables that take the longest to cook (such as carrots, potato, butternut squash) should be added at the bottom of the slow cooker.

Then add your meat, followed by adding all other ingredients such as garlic onion around the meat.

This will allow for the most even cooking across all ingredients and leave you with a delicious meal.

⚡ You May Also Like:  How To Tell if Chicken Salad is Bad?

How Does Cooking Time and Temperature Correlate?

In theory, you could increase the temperature of your slow cooker and then reduce the time the recipe needs for cooking, and vice versa.

Therefore, if a beef stew recipe needs 8 hours of cooking time on low heat, you can adjust it and cook it for just 4 hours on high heat. This is useful to know if you are rushing to prepare your meal.

Although the taste difference will be minimal, this may affect the recipe’s taste. Cooking at a lower heat for longer will typically give you more flavor and richness to the sauce.

Plus, it is always worth following the recipe where possible!

If you are new to slow cooker recipes, you may be wondering if you need to brown the meat before you cook in it a slow cooker.

It certainly won’t hurt to brown the meat before cooking in a slow cooker.

However, be careful. This may change the texture of the meat.

⚡ You May Also Like:  How Long is Vacuum Sealed Chicken Good For? Complete Analysis!

This may be ideal as red meat could be more tenderized, although it may lead to dry meats, so don’t overcook the meat before adding it to a slow cooker.

Another important thing to know is that the meat should never be frozen when adding it into a slow cooker.

Always ensure to thaw all meat before cooking and cook it thoroughly all the way through.

Otherwise, you could be in for a nasty surprise and possibly food poisoning if the bacteria contaminate your dish.

Do Various Meats Need To Be Cooked Differently In A Slow Cooker?

Chicken and other poultry are fundamentally different from red meat. White meat (i.e., meat from fish or chicken breast, back or wing) is not as high in protein as red meat.

However, there is really only one way to cook in a slow cooker. You simply add your ingredients, set the temperature, start a timer, and in a few hours, you will lift off the lid to a fully cooked dish ready to enjoy.

⚡ You May Also Like:  Can You Cook a Whole Chicken From Frozen? Facts to Know!

There are not too many technicalities when cooking in a slow cooker, so you shouldn’t need to worry too much about the skills used to cook red meat and poultry and other white meats.

For example, chicken in medium-size chunks will cook faster than slow cooking a whole chicken for the family.

Our best advice is to follow the recipe you know is tried and tested to perfection. Of course, this isn’t to say you can’t experiment with the meats you use and other ingredients you add.

Edit as you get more experienced cooking with a slow cooker to work out the ideal recipes for your personal taste.

This post answered the question, does meat need to be submerged in a slow cooker?

But what do you think? Comment your thoughts on cooking meat in a slow. I’d love to chat about all things food with you!