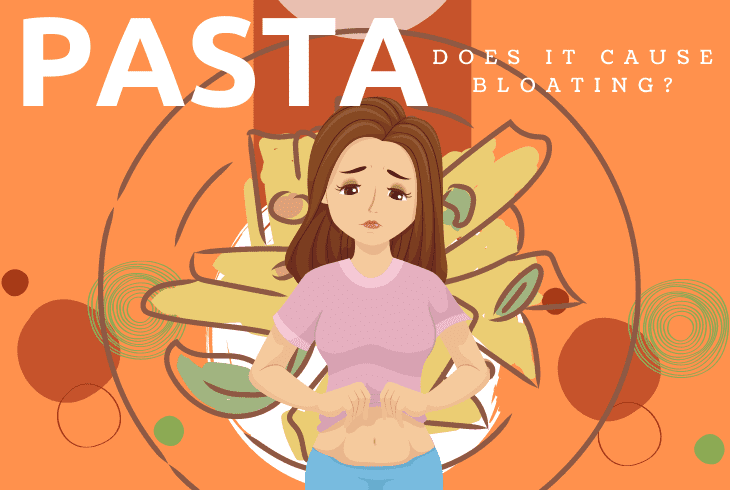 Pasta can often leave you feeling a bit full and heavy, but does pasta cause bloating?

It’s a carb-heavy meal that runners and athletes often indulge in the night before races, but is it wise to do that if you’re just going to feel bloated afterward?

Bloating is what causes you to feel uncomfortable and gassy. It usually happens after eating certain foods, but you can get hit with a bout of gassiness at any time.

There are a lot of gas-giving foods out there, but can pasta cause bloating and gas?

Does Pasta Cause Bloating?

One of the main ingredients in almost every form of pasta is wheat. Since a decent portion of the population has some sensitivity to wheat, many can often feel bloated after eating it.

However, pasta might not be the only problem with your dish of spaghetti.

⚡ You May Also Like:  How Much Does Pasta Expand When Cooked? The Basic Guide

Certain ingredients in your favorite sauces could also be adding to your gassy discomfort.

Why Does Pasta Make You Bloated?

Pasta comes in many forms, but most of it has three ingredients:

Some pasta will also include eggs, vegetable dyes, or seasonings, but the base is always the same three ingredients.

Although not everyone is sensitive to wheat, there are many wheat allergy and Celiac sufferers out there who might find themselves bloated after eating pasta.

This is due to your body’s inability to properly process the wheat in your meal.

In addition, the sodium in pasta can also cause you to feel a bit bloated, especially if you’re not drinking enough water.

Celiac and wheat allergy sufferers are the two groups most likely to feel bloated after a meal of pasta. However, there’s a difference between the two.

Celiac Disease is an autoimmune disease that prevents your body from digesting gluten, a protein in wheat and other grains.

If you have celiac disease, pasta could cause bloating, diarrhea, and other GI problems.

A wheat allergy is a bit different than celiac disease. Whereas celiac prevents your body from digesting wheat, an allergy causes your body to essentially revolt against it.

If you’re allergic to wheat, your whole wheat pasta dinner could leave you with a rash, breathing difficulty, and bloating.

There’s also a small number of people who have non-celiac gluten sensitivity.

In other words, they don’t have a celiac diagnosis or a wheat allergy. Instead, they fall somewhere in between.

If the thought of giving up your pasta dinners is unbearable, don’t worry too much.

If you have a wheat allergy or non-celiac gluten sensitivity, you can try eliminating pasta from your diet and reintroducing it slowly after a few weeks.

This way, you can see how much your body can handle before the bloat hits.

Although pasta is the main cause of bloating after a pasta dinner, it might not be the only factor.

⚡ You May Also Like:  How Long Do You Cook Angel Hair Pasta? Full Guide

So, make sure you cover all your bases because, in some cases, swapping out your pasta might not be enough.

If you tried eliminating wheat pasta and still feel bloated, consider these ingredients.

Cooked tomatoes, like those you’d find in standard spaghetti sauce, can cause gas and bloat in people with tomato sensitivity.

Unfortunately, their gas-causing abilities are so strong that even nursing babies can be affected if mom scarfs down a quick plate of lasagna.

Garlic is a ubiquitous ingredient in pasta dishes and a favorite among foodies everywhere. However, it’s pretty tough to digest.

So, if you’re still feeling gassy after tossing the wheat pasta, the garlic in your favorite sauce could be the problem.

Many pasta dishes include broccoli as the main ingredient in sauces. You might also find it rolled right into the pasta itself.

However, this tasty cruciferous veggie can also be tough to digest, leading to a gassy outcome.

So, if your pasta is flavored with broccoli or in the sauce, that could be your problem.

Some types of pasta include dairy products, as do many pasta sauces.

So if you just downed a plate of ravioli and immediately started feeling stomach rumbles.

The ricotta inside could be making you bloated. In fact, it could mean you’re part of the population that’s lactose intolerant.

Barley pasta is an excellent substitute for wheat pasta. But unfortunately, it can also be a trigger for gas and bloating.

That’s because barley is a gluten-containing grain.

So, if you think you have a gluten allergy or sensitivity, barley pasta might not be the best replacement.

Are There Pasta Substitutes That Don’t Cause Bloating?

As celiac disease and wheat allergies have become more widespread, many companies have developed gluten and grain-free pasta recipes.

These types of pasta let you enjoy your lasagna without worrying about the ensuing gassiness afterward.

So, what are the best pasta options that won’t make you bloat? Here’s a quick list:

You can also try creating your own wheat-free noodles using a veggie spiralizer.

Each of these options will give you an excellent substitute for your standard wheat pasta that’ll help prevent you from feeling too bloated.

How To Prevent Bloating From Pasta

There are a few things to consider when trying to reduce bloating after eating pasta.

Some are easier than others, but they can each help you get some relief.

If your pasta is causing you to bloat to the point of pain, consider cutting wheat pasta from your diet entirely.

You can swap it out with one of the above selections to get some relief, but make sure you double-check the ingredients to ensure there’s no wheat.

If you don’t have a celiac diagnosis and think you might just have a wheat allergy, you can take steps to find your wheat tolerance.

All you have to do is cut wheat pasta from your diet for a few weeks. Then, slowly begin reintroducing it in small amounts.

Make a note once you’ve reached an amount where you start to feel bloated.

That’s your tolerance. In other words, that’s how much wheat pasta you can handle before getting gassy.

When you purchase pasta, make sure it doesn’t have too much sodium.

Although most options don’t have a lot of sodium, even small amounts of salt can make you bloat.

If you’re eating a pasta dish that tastes particularly salty, a quick fix is to drink a glass of water or two during your meal to counteract it.

Avoiding choking isn’t the only reason not to gobble down your dinner.

Although this isn’t unique to pasta, eating too quickly or talking while eating can cause you to swallow down a lot of air with your food.

This air gets trapped in your gut and can cause bloating.

So, does pasta cause bloating? Yes, but with qualifiers. Although pasta can make you feel bloated or gassy, it might not be the only culprit on your plate.

So, if you’re still feeling like you might float away after your favorite pasta dinner, consider looking at the ingredients in your sauces, too.