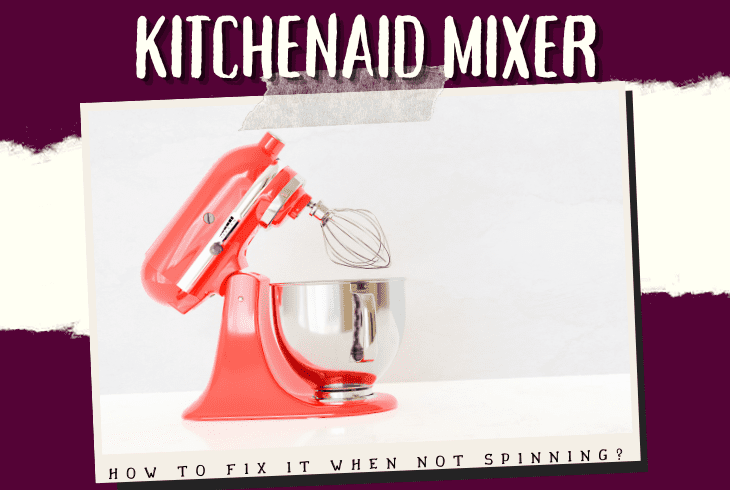 If you are searching for a guide on how to fix a Kitchenaid Mixer that isn’t spinning, then you are in luck.

This article does a proper job of explaining the steps you would take in fixing a faulty KitchenAid mixer.

In most cases, you would need to replace the worm gear on your KitchenAid Mixer. Doing this alone could get your mixer back in shape.

Why Your KitchenAid Mixer Stopped Spinning

The KitchenAid brand is known for a lot of things One of which is that they produce a lot of innovative kitchen items to make cooking in the kitchen a lot easier.

Another thing they are known for is that their products are relatively durable.

But you could have somehow broken your KitchenAid Mixer.

Then just know that you must have made one of the following mistakes.

You Are Not Cleaning The KitchenAid Mixer Properly

Regular and thorough cleaning of the KitchenAid Mixer is a necessity.

Especially when looking to extend the life of your KitchenAid Mixer.

⚡ You May Also Like:  What Can You Make With A Kitchenaid Mixer? - Your Best Options!

Dust and debris from the environment can get into the mixer. Therefore causes damage to the KitchenAid mixer.

It is highly recommended that when mixing you start on a low speed.

Most people make the mistake of starting their mixer on a high setting.

And this could cause massive wear and tear on the KitchenAid mixer.

That being said, it is okay to start the mixer on a lower level and then slowly work your way up to a higher mixer speed.

Not Adjusting The Beater To Bowl Clearance

The beater to bowl clearance is the measure of the distance between the bowl and the beater.

It usually is stated in the KitchenAid mixer instruction manual that this setting would need to be adjusted often before use.

If the beater is too close to the bowl, it could cause the beater to regularly hit and scrape the bowl.

⚡ You May Also Like:  KitchenAid Mixer Not Turning On? - Here’s How To Fix!

This could in turn lead to damage to the mixer, the attachment, and the bowl.

Where Does This All Lead To?

All the issues listed above could potentially damage a major component in the KitchenAid store mixer.

And this component is called the Worm Gear.

The Worm Gear is the exact component in the KitchenAid store mixer that is responsible for taking in damage during the spinning action.

So if your brand new KitchenAid mixer won’t spin, then you should consider replacing the Worm Gear

How To Fix A  KitchenAid Mixer That Isn’t Spinning

We have just highlighted the most probable reason why your KitchenAid mixer isn’t spinning.

The next logical step would be toward fixing it.

To get a better understanding of what to do, we would be grouping the solution into three main areas.

The First step towards fixing the KitchenAid mixer would be locating the Worm Gear.

⚡ You May Also Like:  Can Kitchenaid Bowl Go in Dishwasher? Tips and Guide!

The worm Gear is located in the gearbox, which in turn is located at the planetary. And this is at the underside of the mixer motor.

The function of this worm gear is to take in or absorb the dress on the mixer while mixing.

With improper, constant, or excessive use, the Worm Gear could get faulty.

It is made of nylon material which is hard to touch. When compared to the other gears in the gearbox, the Worm Gear is the least hard.

Replacing the KitchenAid Worm Gear would be a little difficult for a newbie.

However, following the steps listed below, it is highly doable.

Step #1. Take Off The Drip Ring

You would find the drip ring directly around the planetary.

It functions as a seal and would need to be carefully removed to get access to the inner workings of the Planetary.

⚡ You May Also Like:  How To Shred Chicken In KitchenAid Mixer? Complete Guide!

It is recommended you use a flat-end screwdriver.

You can make use of a pin punch and a hammer to get rid of the Roll Pin Shaft.

Simply place the pin punch at the tip of the Roll Pin Shaft and give it a gentle tap. The pin should fall off.

Step #3. Remove The Planetary Off The Mixer

With the planetary being fully exposed, the next step is to gently pry it off using two screwdrivers.

Use them as pry bars by placing them on both indented sides of the Planetary. And carefully pry them off.

⚡ You May Also Like:  Can You Use a Food Processor to Make Smoothies? - Guide

Taking them off should be the next target.

After this, you take off the 4  screws located at the back of the mixer to get access to the Motor.

Now that all screws are loose, take off the enclosing case at the rear of the mixer.

Once this is done, proceed to pull off the strain relief and power cord.

Step #6. Remove The Motor Housing From The Mixer

The next step would be to lift the Motor housing upwards, away from the mixer.

Once this is done, set it aside and proceed to remove the excess grease located on the Worm Gear.

Do this with a small knife.

Unscrew the screwdrivers that hold the Gear Tower Assembly in place.

⚡ You May Also Like:  Can You Use a Food Processor to Make Smoothies? - Guide

Then remove the roll pin that is responsible for holding the Gear Tower in place.

Do this using a hammer and a pin punch.

Step #8. Remove The Gear Tower From The Assembly

Once the Roll Pin is removed, proceed to pull out the Gear Tower and then remove the worm gear.

Save the two washers that are attached to each side of the Worm  Gear.

They would be needed when reassembling the new Worm Gear.

Once this has been done, you can then replace the Worm Gear.

Do so by attaching a new Worm Gear to the two washers that were saved. Then place it perfectly into the Gear Tower Assembly.

After successfully replacing the Worm Gear of the KitchenAid stand mixer, the next thing to do is to reassemble the mixer.

⚡ You May Also Like:  KitchenAid Mixer Not Turning On? - Here’s How To Fix!

If you disassembled the mixer by yourself, this should be quite easy.

However, here is a highlight of what to do:

By following the detailed steps and processes listed above, you should have no issues figuring out how to fix a KitchenAid mixer that isn’t spinning.

You can also decide to employ the help of a professional in fixing your mixer.

With that being said, do check out other articles listed on our website as you might learn something new.