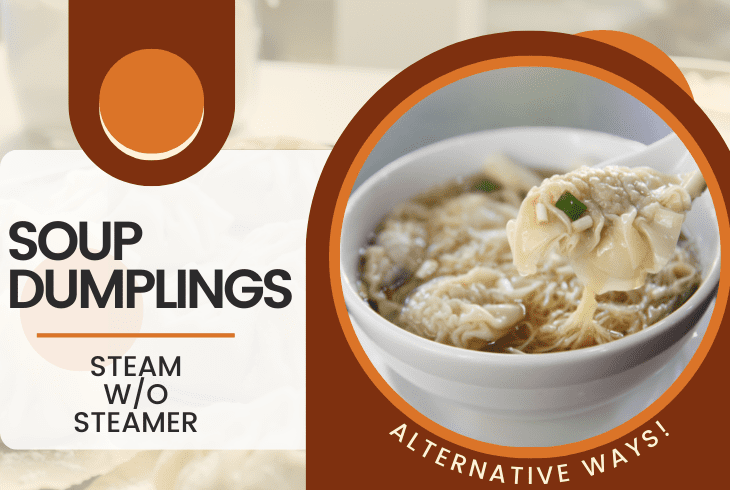 Today you’re in luck as this article will be taking you through how to steam soup dumplings without a steamer.

We all know that one of the most popular cooking techniques for making dumplings is steaming.

Whether you’re making from scratch at home or boiling frozen ones, you steam it.

Now some of us might not have those fancy little bamboo steamers or metal steamers and making dumplings can be scary for newbies.

There are several kitchen appliances one can use in the absence of a steamer ranging from microwave to aluminum foil. The truth is, not having a steamer allows a lot of flexibility and has become a tremendously famous life hack.

Can You Steam Soup Dumplings Without A Steamer?

Since soup dumplings are quite different from normal dumplings, most people believe that they can’t be steamed without a steamer.

Well, they are wrong but let’s take a second to consider why they would think such in the first place.

Since a soup dumpling is made up of one-third of broth, most people feel as though steaming it on without a steamer might ruin its integrity.

As I said earlier, they are wrong because the wrap of the dumpling is designed in such a way that it is thick enough to be steamed anywhere.

How To Steam Soup Dumplings Without A Steamer

There are several ways to steam soup dumplings without a steamer.

The steps are quite similar to how to steam dumplings without a steamer.

I’m just going to skip the whole process of making the dumplings cause I assume we all know it.

I’ll jump right into steaming the already-made or bought dumplings using the following equipment and methods.

Method #1: Using A Rack Or Chopstick

One of the simplest ways to construct a homemade steamer if you don’t have one is to use a rack or a chopstick.

Use any of these to support a flat ceramic plate over or use a pot of boiling water.

Not only is it easily accessible, but it is also quite flexible and easy to use.

When using a chopstick, you have to line them across the pot or saucepan leaving just enough room between them for the dumplings to stay.

Using a chopstick is more feasible when you are cooking something alongside the dumplings.

And maybe the dumplings are placed on top of the cooked food.

How To Use The Rack Or Chopstick Right

You can make use of any elevated metal rack. A wire rack is equally as effective.

By placing a wire rack at the bottom of a pot or wok and using it to support the dish, you can steam dumplings.

Try using this technique while seeing to it that water doesn’t actually touch the food.

And to keep your dumplings from sticking to the platter, either coat them with oil in small layers or instead add the paper that is brushed in oil.

You can also make use of green leafy vegetables to serve as a barrier for the plate and the dumplings.

Afterward, gently arrange all of the dumplings on a plate, leaving some space between them so they don’t adhere to one another.

When the water is boiling, cover the pot and let the food steam for 10 minutes or so, or until it is thoroughly cooked.

Using water and the microwave to steam dumplings is another alternative to using a steamer.

You can use a microwave to steam a normal dumpling but it is rarely advised to use it to steam soup dumplings.

Even with that being said, it is not impossible to steam soup dumplings with a microwave, one just has to be extra careful.

Using a microwave is more effective if the dumpling is frozen, to begin with. Put the frozen dumplings in a bowl that can be used in a microwave.

Then you can proceed warm water into the bowl, covering the dumplings entirely.

Place the bowl in the microwave and set for 3 to 4 minutes depending on the number of dumplings in the bowl.

If you don’t have a microwave or a metal rack, a good old aluminum foil can save the day.

With the help of aluminum foil, you can steam dumplings without a steamer on your own.

How To Use The Aluminum Foil Right

Using this approach, you will just have to make three aluminum foil balls of similar sizes.

Then little inches of water should be added to a pot before your aluminum foil balls are placed there. Place a plate inside the pot on the foil balls.

Try being careful so that the water doesn’t really touch the object being supported.

To keep your dumplings from sticking to the platter, either coat them with a thin layer of oil or add some paper brushed with oil to avoid sticking.

You can also make use of green leafy vegetables to serve as a barrier for the plate and the dumplings.

Arrange your steamed buns on the plate while leaving enough space between them.

At this point, you can see that the steps are quite similar to when using a rack, the only difference being the material used to carry the plate in the pot.

By using a microwave and by boiling using a pot.

Secondly, the only way to make use of a zip lock bag is if the dumpling is frozen.

If you have a metal steaming basket used for steaming vegetables, you can also make use of it to steam dumplings.

We have officially gotten to the end of this article and I hope I have been able to properly discuss how to steam soup dumplings without a steamer.

Steaming soup dumplings might be trickier than steaming normal dumplings.

But with the right equipment and enough understanding, it could be as easy as boiling water. Don’t use too much water while steaming.

And only make use of a microwave when necessary while steaming a soup dumpling.

I hope this article was helpful. Thank you very much for your time and patience. Stay safe!