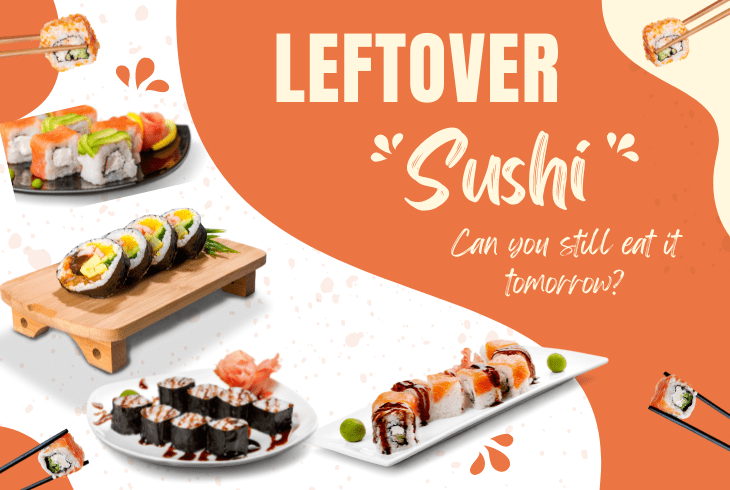 Can you eat leftover sushi the next day? Eating delicious sushi excites your taste senses and is also beneficial to your health since eating spoiled sushi may result in food illness.

This article will answer this question and teach you how to store sushi for a day safely.

You can keep your leftover sushi in the fridge for up to 24 hours. Even if the sushi gets softer and the rice gets harder, it shouldn’t hurt you to eat sushi 24 hours after it was made.

Sushi is a Japanese dish made with vinegared rice that has been cooked and usually has some sugar and salt added to it.

It is served with various ingredients, such as raw seafood and vegetables.

The styles of sushi and how it is served vary a lot, but the main ingredient is sushi rice, which is also called shari or sumeshi.

Can You Eat Leftover Sushi The Next Day?

You can eat sushi again the next day. But this depends on several factors and conditions.

They are as follows:

1. The Type of Sushi

If your sushi contains raw fish or meat, it is better to consume it all at once. However, to avoid becoming ill, store leftover sushi properly.

⚡ You May Also Like:  Perfect Turkey Meatloaf Temp And Time Guide

Raw fish may cause food poisoning, which can cause you to feel unwell, vomit up, have stomach pains, and need to use the restroom often.

If your sushi contains fresh vegetables, your rolls may last five days. Like a fresh salad, your vegetarian sushi may wilt in quality much sooner.

If you keep it for too long, it starts to smell bad and taste bad, which can make you sick.

On the other hand, well-kept cooked sushi can last two or three days in the fridge.

But if it has an unpleasant smell, you shouldn’t eat it. The best thing to do with sushi is to eat it within a day.

You must remember that the best-before dates for your sushi may vary depending on the other components, such as cream cheese, imitation crab & mango.

⚡ You May Also Like:  How To Soften Beans After Cooking? Complete Guide

However, other ingredients, like soy sauce, can kill bacteria and may slow down the rate at which your sushi goes bad.

The way your sushi is stored also affects how long it will last.

If you want to keep sushi for more than a day, you should put it in the fridge.

If not, it can only be kept at room temperature for up to two hours.

Here are some things you can do to make your sushi taste good the next day.

You can put rice vinegar and lemon juice on it instead. In addition to adding flavor to sushi, rice vinegar helps keep it fresh for as long as possible, usually about three days.

⚡ You May Also Like:  What Does It Mean to Proof Bread? Complete Guide

Separate Sushi and Sauce From Each Other

If you want to save your sushi for later, you should not keep it with the sauce.

If you store the sushi with the sauce, the rice and nori sheets could soak up the moisture from the sauce and make the sushi soggy.

This would ruin the sushi.

Soy sauce is a great way to keep your sushi fresh. Soak a paper towel in the sauce and use it to wrap your sushi carefully.

Then, you can put it in the fridge until the next day. Your sushi will still taste good, and the rice will stay moist.

You can heat your sushi in the microwave for about 30 minutes. Even though it might not be as good as sushi made right before your eyes, it will still be tasty and healthy.

While warming up your sushi in the microwave, turn down the heat, and don’t cook the fish by heating it too much.

⚡ You May Also Like:  Can I Mix Canola and Vegetable Oil for Frying? Is It Possible!

This also keeps your rice from getting dry and keeps it moist. Avocados, carrots, and other vegetables should not be cooked in the microwave.

Sushi that has been out for more than 24 hours can still taste good if you bake it at 300°F for about eight minutes.

Sushi can also be deep-fried to make it crispy.

Put Your Sushi in The Fridge.

If you still want to save sushi for later, you can do so by putting it in the fridge.

To keep bacteria from growing, let the sushi cool at room temperature for 30 minutes after it’s made before putting it in the fridge.

Wrap Up Your Sushi

Keep your sushi in a plastic bag to keep bacteria from getting into it.

After that, put it in a container with a lid to keep air from getting into the sushi before putting it in the fridge.

If raw sushi is kept at room temperature without a fridge, it will only last two hours. But if it’s cooked, it’s best to eat it within a day.

Make sure the fridge is set to a good temperature for food. Because it has vegetables and rice, keep it at 41°F, which is just below freezing.

The rice can get harder, and the seaweed can get as soft as paper.

Most fishers don’t fish much on weekends, so sushi restaurants don’t have any fresh fish to serve.

When Not to Eat Leftover Sushi?

Is sushi still good to eat the next day? There are various reasons to avoid eating leftover sushi, particularly if it shows indications of spoilage.

Here are several warning signals that you should avoid eating leftover sushi:

Sushi should not have any bad scents: even if it is a day old. It should not smell fishy, nasty, or ammonia-like. Don’t consume it if it has a distinctly unpleasant odor.

⚡ You May Also Like:  Can You Eat Cold Mashed Potatoes? - Are They Good For Your Health?

Strange discoloration: Any unusual discoloration might indicate the presence of bacteria or mold development. Consume no discolored sushi.

Sushi that tastes harsh, sour: Or otherwise objectionable is most certainly rotten and should be discarded.

Sushi with a slimy, moist texture: Or a weird shine should be discarded since this might be a symptom of bacteria development.

Mold: may be identified by fuzzy growth, holes, or dark-colored patches.

FAQs About Eating Leftover Sushi The Next Day.

Do you have any additional questions about is sushi still good the next day?

Can You Eat Reheated Sushi?

If you put your sushi in the fridge after preparing it, the taste and texture will degrade, so I always suggest eating it as soon as you finish creating it.

As with the Nori, warming will not improve the flavor or texture of wet veggies.

How long May Sushi Be Left Out Before It Spoils?

As a general rule, sushi should be stored at room temperature for up to two hours. Otherwise, keep sushi refrigerated and eat it within a day after preparation.

⚡ You May Also Like:  Can You Fry Frozen Chicken Wings Without Thawing? Complete Guide!

What Will Happen If I eat Sushi That’s Gone Bad?

Salmonella infection can cause fever, stomach cramps, and diarrhea, which usually start one to three days after eating food that was contaminated with Salmonella.

Can you eat leftover sushi the next day? Sushi that has been properly kept may be eaten the following day.

However, after 24 hours, discard the sushi to prevent foodborne illness caused by bacteria development.

On the other hand, cooked sushi may be stored in the refrigerator for up to three days.

Furthermore, if your sushi has an unusual odor, it should be thrown away. Thanks for reading!