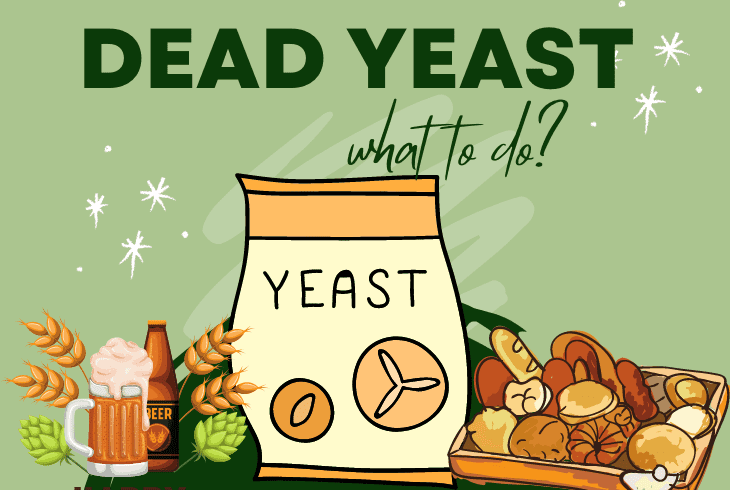 Have you ever wondered what to do with dead yeast? It’s easy but disheartening to throw it away, and the good news is that you don’t have to toss expired yeast!

That’s right, there are many ways to salvage dead yeast, including a few tasty ones.

Most people buy yeast that comes in multiple premeasured squares or packages, the store opened containers in the refrigerator, and try to use it before the expiration date.

Still, it’s not uncommon for yeast to go bad, even if you followed the storage guidance faithfully.

What Is Yeast, and What Do We Use It for?

Yeast is a single-celled living organism – a fungus – that thrives on sugar and starch. These microorganisms provide humans with bread, beer, and wine, among other things.

There are two main types of yeast used in food: baker’s and brewer’s, which are made from different strains of the Saccharomyces cerevisiae.

Although you can swap them, you will notice a difference in taste, whether it be beer or bread.

Furthermore, yeast is also used for baking bread and even as biofuel and a probiotic.

We usually buy active or instant dry yeast in the supermarket. It often comes in multiple packets, so we have overstock even if we plan to make just one loaf of bread.

It seems wasteful to throw it away, so how do you know if you can still use it?

How Do You Know if Yeast Is Dead?

Who wants to go through the trouble of baking bread only to have it come out of the oven as hard as a rock?

So, we suggest following a few simple steps to “proof” your yeast and make sure it is alive:

When in doubt your yeast is still active, proof your yeast!

What To Do With Dead Yeast

You cannot revive yeast once it is dead, but that does not render it useless. On the contrary, you can use dead yeast in several ways.

Brewer’s yeast is used to make alcohol and as a vitamin B and mineral supplement.

In addition, it has some specific uses once it is dead:

Mixing brewer’s yeast and honey create a face mask that is beneficial for oily, combination, or acne-prone skin. Mix the two ingredients with a little lukewarm water and spread it on the face.

Let it dry completely and rinse off. Using this mask regularly will aid in getting rid of impurities and brighten the complexion.

Add shine to your hair by making a yeast and water mask. Use half a packet of dead yeast with warm water and let it sit for half an hour before rinsing.

To keep your plants fertilized, dissolve your dead brewer’s yeast packet into about ¾ gallon of water. You can use this to water your plants once a week.

The most common way of using dead baker’s yeast is to add it to food. Even dead yeast has plenty of nutritional qualities that make it worthy of eating.

⚡ You May Also Like:  Does Hershey’s Chocolate Syrup Go Bad? Complete Guide!

Being low-fat and gluten-free, it is also full of proteins, essential amino acids, folic acid, zinc, selenium, and B vitamins.

Nutritional yeast is also considered “dead” yeast, but this is because it is manufactured in a way that the yeast is deactivated, not because it was forgotten in the cupboard.

As a quick add-on to food, you can take advantage of the nutrition still available in dead yeast.

Here are a few ideas:

Salads – sprinkle it as a seasoning over your salad.

Soups – in addition to nutrients, you can add yeast to create a creamier texture.

Popcorn – this is probably the most popular use as it adds nutritional value to this delicious treat.

Sauces – add yeast to salsa, hummus, gravies, and sauces for a thicker texture.

Dough – you can add dead yeast to the dough to make it more nutritious and be a bit more smooth and flexible to work with.

What To Do When Your Bread Doesn’t Rise

What happens if you didn’t realize your yeast was bad before you attempted a loaf of bread?

It’s one of the worst feelings to watch and wait for your bread to rise only to be disappointed.

You might even curse yourself for not proofing the yeast first. Don’t beat yourself up! You can salvage it if you know what to do with dead yeast dough.

First, you could mix some more active yeast and mix it in to see if it triggers the dough to rise. It’s a good idea to try a different package, even if it means a quick trip to the store.

The other option is switching gears to transform the dough into something else.

Why not shift the bread dough into a flatbread or pizza crust?

For flatbread, separate the dough into manageable pieces to roll out into thin discs, like a tortilla. Thinner discs cook faster and won’t be as tough.

Bake them on a pizza stone in the oven for up to six minutes until thoroughly cooked.

⚡ You May Also Like:  How to Tell if Cooked Fish Is Bad? A Definitive Answer

Pizza is an easy, and delicious, alternative because you can create a super-thin crust and pile on your favorite toppings.

It’s even possible to make a few individual-sized pizzas so that several people can personalize their meals.

How To Prevent Dead Yeast

Unfortunately, it’s not entirely possible to prevent yeast from dying. However, properly storing your yeast can go a long way to maximizing its lifecycle.

It is always best to keep yeast in an airtight container, preferably in the refrigerator or freezer.

Dead Yeast Is Not a Dead End

Yeast is an exceedingly useful microorganism, even past its expiration date. While you won’t produce a puffy loaf of bread or bubbling brew, you can still use it.

You can enhance a meal, improve your skin and hair, and even support your garden if you know what to do with dead yeast.

While it’s disheartening to discover your yeast went bad, especially if you had your heart set on fresh-baked bread, it’s not the end of the world.

Now you know several ways to salvage dead yeast for other purposes.

Plus, you can make use of any bread dough that doesn’t rise with a quick pivot in the kitchen.