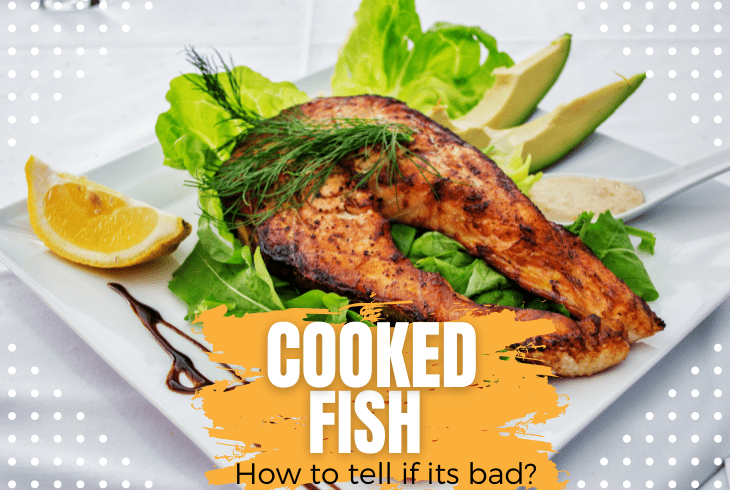 It’s essential to know how to tell if cooked fish is bad.

Although most people are more familiar with knowing whether raw fish is spoiled, there are reliable ways to assess cooked fish.

Everybody likes a delicious fish dinner–and if you have leftovers, even better! But unfortunately, fish (like any other food) can succumb to aging and bacterial growth.

You can tell if your fish is bad if it has been in the fridge for too long, has a rancid smell or off appearance, and/or is becoming mushy or moldy.

Make Sure the Fish has been Stored Properly

If you want to know how to tell if fish is bad after being cooked, the first thing you should do is examine how the fish has been stored.

After cooking, you should put the fish in an airtight container and store it in the fridge or freezer.

Keeping your food in an airtight container like a plastic container (or even a plastic bag, if you’re in dire straits!) ensures that bacteria from other foods in your fridge doesn’t enter into the fish.

It also makes sure that nothing inside the container can get out–so if your fish has spoiled, the container keeps the bacteria inside.

If your fish has been kept outside of the fridge for several hours after being cooked, or if it hasn’t been sealed properly, it could be a sign that it has gone bad.

Check the Time the Fish has been In the Refrigerator

The next step is to investigate how long your fish has been in the fridge.

According to the United States Department of Agriculture, cooked fish (like other cooked meats) should be kept in the fridge for three or four days.

It can be easy to forget how long fish has been in the fridge. But for your safety, you should stay on top of it.

If you need, you could label your containers with the date you cooked the food inside–that way, you can make a quick judgment on whether the fish is good.

Ultimately, how to tell if fish is bad when cooked can be a matter of time (no pun intended). If it’s been in the fridge for too long, toss it.

When investigating the fish itself, visual appearance can help you. If a fish has an off appearance, it is likely spoiled.

Fish that has been in the fridge for too long will begin to dull in color. What’s more, the natural oils it produces will congeal and sometimes darken.

If your fish has an off appearance or looks different from when you first cooked it, it may have spoiled.

The nose is one of the human body’s most reliable tools.

It can tell us things that simple visuals can’t show–and one of its most important functions is to detect the presence of dangerous bacteria.

⚡ You May Also Like:  From Rad(ish) to Bad! How to Tell if Radishes Are Bad?

When cooked fish is in the fridge for too long, it takes on a rancid smell.

It will depend somewhat on how it was cooked, but regardless, it will develop a sharp, unpleasant odor that will be noticeable as soon as you open the package.

This smell isn’t an everyday odor; this will be an aggressive stink emanating from the fish. If it smells bad, it’s time for the trash.

Next up, investigate the fish’s texture. This method isn’t necessarily foolproof, since refrigeration can have lots of effects on cooked fish.

That said, it’s a good last resort if you’re flagging on the smell and appearance.

When fish spoils, it loses its structural integrity; it will be squishy and slimy to the touch. This decay is a sign that your cooked fish is rotten.

The most damning texture, of course, is fuzziness–which means that mold has begun to grow on the fish.

If your fish has mold, throw it out immediately and sanitize the container, as mold is hazardous to consume.

That said, you shouldn’t make this method your end-all-be-all option. There are many situations where you won’t be able to discern an off texture, such as when you cook fish in small chunks.

For that reason, it’s better to use texture more as an auxiliary sign.

Check the Foods Around the Fish

When applicable, check the other foods in the same container as the fish.

Many people will store fish alongside other components from the same meal, which means that these foods can be a barometer for the fish’s freshness.

If, for example, you stored salad greens next to the fish and the leaves are becoming slimy and brittle, then it’s likely that the fish is spoiled, too.

How to Tell if Cooked Fish is Bad? When in Doubt, Throw It Out

This lesson might seem obvious, but it always bears repeating: when in doubt, throw it out.

If you doubt that your food is safe, it probably isn’t worth risking the meal.

After all, is it worth food poisoning to get an extra bite of last Tuesday’s flounder almondine?

Ultimately, as delicious as your fish might have been, your health is more.

There will always be a chance to have more fish, while food poisoning can have lasting consequences.

Can You Store Leftover Fish in the Fridge?

If you want to keep some cooked fish on hand for a longer time, then you can certainly make use of a freezer.

Stick the fish in a shallow airtight container and then put it in the freezer, then give it a day to thaw when you want to eat it.

Keep in mind, however, that a freezer is not like amber–it will not keep specimens intact for millions of years. Bacteria can still grow in the freezer, albeit very slowly.

For that reason, it’s best to keep cooked fish in the freezer for a month at most. After that, throw it away.

While microwaving can warm fish back up after it’s been refrigerated, it cannot cook things at a high enough temperature to kill off bacteria.

On top of that, microwaves are notoriously inconsistent at heating things.

Just think of how long you need to microwave leftovers to get them warm–the machines heat food so unevenly that you can’t guarantee that bacteria are destroyed.

One of the greatest struggles for any cook is knowing when to say goodbye.

But for your safety, it is important to know how to tell if cooked fish is bad, as it can keep you safe enough to cook another day.

You have several options available to you when it comes to investigating cooked fish. The first thing you should do is check on your fridge’s integrity; then, inspect the smell, appearance, and texture.

Finally, if you simply can’t decide, just throw the fish out. When in doubt, throw it out!