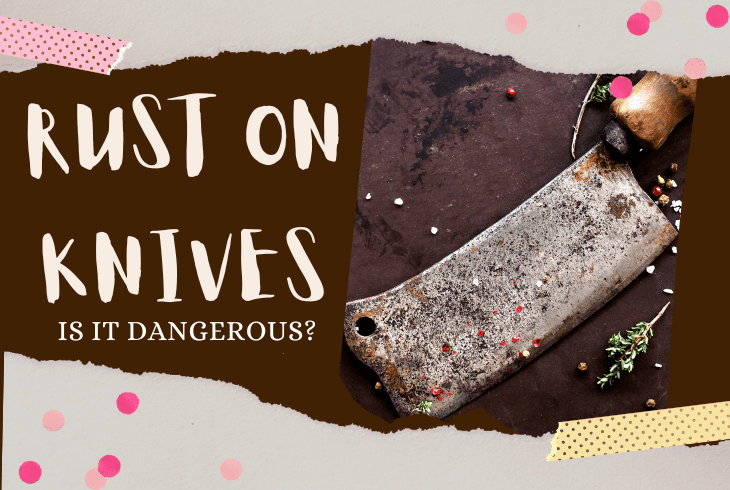 Is rust on Knives dangerous? Well, this seems like a big question for today. Rust is also called iron oxide.

A red and orange flaky substance that you see growing on metal. Iron oxide is from the reaction between oxygen and Iron, with water.

Also, it does not have to be water.

Therefore, when the iron in the knife is exposed to oxygen and moisture.

When cutleries stay in the water longer than they can be washed by hand, it makes them more prone to rust in the dishwasher.

Is a rusty knife dangerous? Yes, chances are high that coming into contact with a rusty object, especially if it inflicts a wound could cause tetanus and other health issues. The tetanus bacteria takes advantage of rust to thrive.

Steel Types and how They Rust

Carbon steel is composed of iron, chromium, carbon, and other metals.

Chromium surrounds iron and protects it from oxidation by oxygen.

However, chromium reduces the durability of the blade. Sharpening is required more frequently than with stainless steel.

Stainless steel is less likely to rust than carbon steel, but that doesn’t mean it won’t rust.

It can still rust due to heavy abuse. Titanium and ceramics do not use iron, so they are 100% rustproof.

How To Prevent Your Knife From Rusting

Some clever person coined the cliche: Prevention is better than cure.

Now, the reaction between water and iron is what makes knives so susceptible to rust.

If you are looking to prevent your knife from rusting then how much it comes into contact with water should be limited.

Also, do not leave your knife soaked in water, or on the outside overnight.

Avoid the dishwasher as much as you can, and this way, be sure that you won’t spot the slightest rust that could pose a threat to your knife and to yourself.

These are just basic but all the tips you need to prevent your knife from rusting.

How to Remove Rust on a Knife

Now, if prevention did not go down so well with you, and your knife gets rust, how do you remove it?

This is how you do it.

Lemon juice can work magic in removing rust from your kitchen knife.

You must be wondering how? Relax, it is simple.

See, other than just applying lemon juice to your food, you can use it to remove that rust, how do you do it?

Cut it in half, or smaller sizes, if you want to. Then?

Then rub it while pressing out the juice on both surfaces of the knife.

Away from lemon juice, vinegar is also an ideal and premium option.

All you are required to do is soak up that knife in a solution of water with vinegar, leave it to rest for up to an hour then wash the knife.

You know baking soda, right? Yes, there is no other. That baking soda in your kitchen could help do away with that rust.

How do you do it? You make a paste. A thick paste, by stirring baking soda in water.

So, then like in all the other methods, you apply this paste on the knife, and gently, very gently.

Use it perhaps with a brush like a toothbrush, start scrubbing the surface, and do it gently.

In no time, the rust will be gone.

If you like using your own time to do things then using citric acid could play by your book.

It involves time, especially overnight., so that you wake up in the morning to rusts that are out.

How then? Again, so simple.

You get the citric acid from that shop, then add it to hot water and soak the knife in it for the night.

What next? Wake up in the morning and without a lot of straining, wash away the rust. Simple, is it?

What You Need to Know About Removing Rust from a Knife

Prevention Is Always the Best Way

Told you before, whoever coined the cliche Prevention is better than cure must have been so intelligent.

And so, and so, one vital thing you need to know about removing rusts from your knife is, don’t remove them, prevent them.

You can oil the knife, oiling is one sure way for preventing rust. You can also avoid the dishwasher, air out the knife well after washing it in the dishwasher.

Do whatever it takes to keep rusts on your knives at bay.

The knife blade, which is the surface that cuts is so prone to blunting at the slightest mishandling.

So, as you practice your sure-fire rust removal techniques, beware that most of these techniques are as good as doing away with the rust.

But instead, these techinques dampen the blade along by scrubbing the surface of the knife. So, it calls for preciseness with how you do it.

Some Rusty Spots May Be Irreversible

Some rusts look like wherever they came from, they swore never to go back. They came to stay.

Now, if you have been entertaining that rust for long, then, it just may have grown irreversible.

No amount of scrubbing will wash it away without destroying the foundation of the knife.

What you need to do is accept it. Acceptance heals, and either uses it that way or dump it and replace it with a newer one.

Blade Type and Brand Are Important

How one type of blade type or brand responds to the various listed methods of rust removal from your knife differs from one knife to another.

It is therefore prudent that you find out. Choose the method that suits and works best for the type of knife in your cutlery.

Rusty Knives Can Be Harmful to Your Health

Is A Rusty Knife Dangerous? As we even draw a conclusion, the key aim is to keep you and your knife safe.

Rust doesn’t cause tetanus, but it provides a thriving breeding ground for bacteria that cause it and others that can cause serious health issues.

So, one thing you need to know is that rusty knives are dangerous.

Read Next: Can You Use A Baking Pan On The Stove?

Conclusion on Is Rust On Knives Dangerous?

In this article, we have learned that there is an increased risk for tetanus from rust knives and other bacterial infections.

Knives, cutlery, pots, and pans can rust if made of steel.

The only problem with rusty knives is that they are unsightly and can contaminate food preparation.

The sooner you deal with rust on your knife, the easier it will be to remove it and the more likely you are to continue using it.