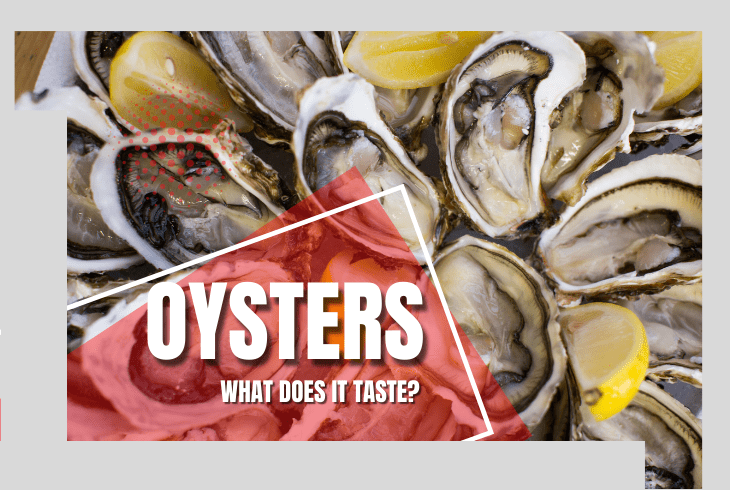 What does oysters taste like is debatable, as some people view them as an unforgettable and unique taste, while others describe them as tasteless and bland?

The only way to know for sure is to try an oyster and see for yourself!

But to give you an idea of what you’re getting into, this piece will discuss the various flavors oysters offer, depending on the preparation method, region, and more.

The oysters’ location plays a huge factor in their flavor and texture.

If you love clams, mussels, and seafood in general, you’ll likely enjoy the distinct flavor of oysters, whether you try them fresh or otherwise.

Different oysters have varying flavors like a fine wine, from sweet and creamy to briny and fishy.

Oysters are generally described as having a salty, fresh taste similar to some fish.

Oysters are best-known for being enjoyed raw, but there are many ways to cook and enjoy oysters.

If you are introducing yourself to oysters and feel deterred by a raw oyster, you can try a different preparation!

Below are the best ways to consume oysters for a yummy flavor and texture.

Classic and straightforward, raw is likely the most popular way people consume oysters.

The oysters are cleaned, shucked, and cleaned again, often served on the half shell for a fun, beachy aesthetic.

Raw oysters typically take on the flavor of whatever accouterment you add to them.

Many people like a squeeze of lemon juice, while others like a dash of Tobasco to add some heat.

The options are endless, as oysters tend to meld well with almost any flavor.

People also enjoy adding caviar or fresh, chopped fruit on top for a combination of sweet and salty.

You can also grill oysters for a chewier texture, savory taste, and texture.

The beauty of grilling oysters is that you can shuck them and marinate them oysters just before gas grilling them, or you can toss the oysters on the grill in their shell.

The heat will kill the oysters, opening their shell and cooking them.

They take on a more earthy flavor and chewy texture when you grill oysters.

People who don’t want oysters’ super fishy and salty flavor will grill them. Grilling them dulls the fishy flavor in favor of an umami taste.

Fried oysters have an interesting contrast because the oyster is soft and chewy, while the fried breading is very crunchy and comforting.

If the slimy texture of oysters is what throws you off, this is an excellent cooking method to get the flavor of an oyster without the strange liquid that usually comes with it.

Fried oysters are great with some French fries or as a filling in a Po’Boy sandwich.

Like so many other delectable foods, you can also bake oysters in the oven to change the texture and get a different flavor.

A baked oyster has the texture of a fully cooked egg white, chewy and soft with a delicate texture you can bite through with ease.

Baked oysters are where people report a copper-like flavor. To be clear, this is not an unpleasant flavor to most that observe it. But the metallic taste adds an interesting mix of salty, umami, and earthy flavors.

If you’re nervous to try oysters, baking them is a safe option, as they become a more subtle and familiar flavor, comparable to cooked fish.

Below are eight of the most popular varieties of oyster. Four are east coast oysters, and four are native to the Pacific ocean.

Oysters from the west coast are quite different from oysters taken from the east coast.

This distinction is important because the coast determines its size, texture, and flavor.

East coast oysters are often much smaller and sharper, narrow shapes. These oysters are usually saltier with a chewy texture because they live in colder water.

These oysters have a buttery, creamy flavor, setting them apart from the east coast oysters with a sharper and savory flavor.

Neither west nor east coast oysters are considered better than the other. The oysters work better in different dishes, and people have their own flavor and texture preferences when it comes to oysters.

Children and picky-eaters often start with the west coast because they’re a more familiar texture and flavor to most.

How to Shuck an Oyster

Shucking oysters can be tricky, so below is a brief overview of the process so you have some shucking knowledge to work off.

Below are commonly asked questions about enjoying oysters.

Will raw oysters make you sick?

Like any protein, oysters can make you sick, but this is extremely rare. As long as the oysters are prepared properly and kept at the right temperature, they should be perfectly safe to consume.

We don’t recommend you save raw oysters as leftovers or bring them to your work as a packed lunch. They are delicate and must be kept cold until you cook or eat them.

Another important component to their quality is how well they are cleaned.

An oyster cleaned haphazardly is more likely to make you sick than a thoroughly cleaned and shucked one.

Oysters are considered a delicacy in many places. Therefore, they tend to be a bit pricey.

Depending on the quality and variety, many restaurants will serve a single raw oyster for between $1 and $4.

Like lobster, oyster prices change as the market changes, whether demand increases or supplies decrease.

Buying oysters at your local fishmonger or grocery store will be significantly cheaper, but you have to clean and chuck them yourself. At restaurants, you often pay for the immense labor that prepares oysters.

What does oysters taste like if its gone bad?

There are three main ways to tell if an oyster has gone bad. The easiest if it’s open before you have shucked or cooked anything, it is dead or dying and will not be good.

If the oyster is completely dry inside and out, it is also likely dead or dying.

And lastly, if the oyster smells significantly different from the rest of the oysters or much, much stronger, it has probably spoiled and should be discarded.

Eating bad oysters can make you sick, which is not the ideal introduction to this tasty food.

So, what does oysters taste like? The answer is not clean-cut, as the varieties, methods of preparation, and more contribute to the flavor.

We can say that oysters offer a unique dining experience, whether in a restaurant or at home.

If you’ve tried an oyster and are still wondering: What does oysters taste like? It’s time you get out there and try one of these slippery creatures.

They will surprise you with their intriguing texture and memorable flavor, no matter if you have them fried, raw, cooked, or baked.